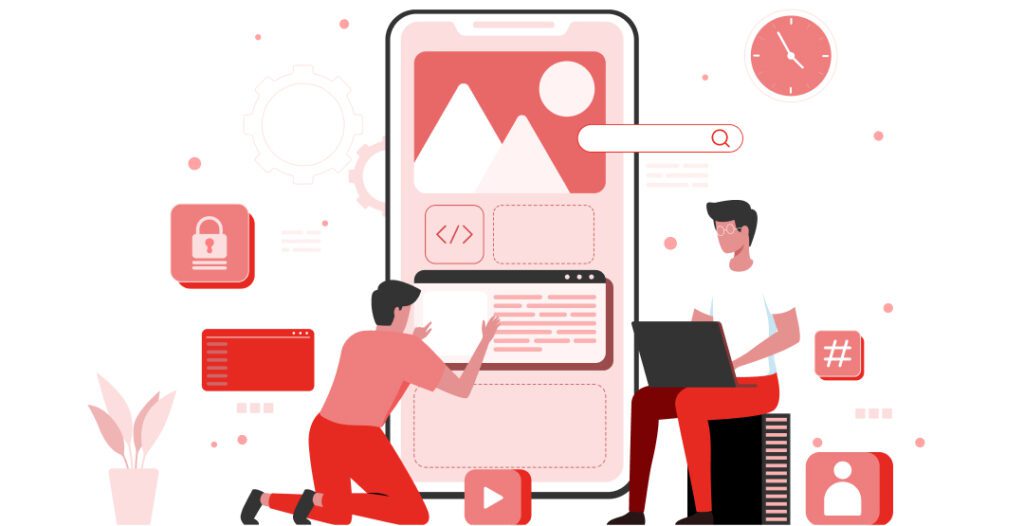 Application development means designing the application software using client and user-side programming so that it can be accessed on the web browser. There are some differences between mobile and web. There are two main tenets for mobile, IOS and android. So developing an app for mobile requires building a downloadable software package, executing backend assistance, and testing the app on selected tools. Whereas web apps are saved on a remote server that can be used from any browser, without installing anything on your system.

The frameworks for software development represent some of the most important for the creation of new applications and web systems tools. They help sum up high-level functionality with greater agility and efficiency and it decreases IT staff work time.
These are the main contemporary frameworks that are used:

Spring Boot is a solution for the Spring Java framework based on the “convention over configuration” principle. It reduces the complexity of developing new Spring-based projects. To do this, Spring Boot provides the basic configured structure of the project, which includes the guidelines for using the framework and all relevant third-party libraries for the application, paving the way for us to start developing it as quickly as possible. This greatly simplifies the creation of standalone and playable applications, which is why most new Spring-based applications are developed with Spring Boot.
The features of Spring Boot can be summarized as follows:
● Incorporating direct web applications/servers like Apache Tomcat container or Jetty, eliminating the need to include files WAR (Web Application Archive)
● Maven configuration simplification thanks to “starter” POMs (Project Object Models)
● Automatic Spring configuration where possible
● Non-functional features, such as metrics or outsourced settings

This open-source project was created by the Twitter developer team to create a library of their resources to make their work easier.
The real reason is that every developer has a different way of approaching coding problems, and when a multitude of them are involved in the project, inconsistencies are inevitable.
Bootstrap is a CSS framework that was initially developed by Twitter in 2011, although shortly after the license was released and its development continues in a GitHub repository.
This framework allows you to shape and style a website using CSS libraries. These include different fonts, buttons, menus, boxes, and other elements that are commonly used on any web page.
It is an excellent tool that allows us to create user interfaces that are simple, orderly, and fully adapted to any device and screen. This point is paramount since the Google algorithm rewards those web pages that are well adapted, especially to mobile devices.
It also offers tools that allow us to use the styles and elements of its libraries, besides that it supports HTML 5 and CSS 3 very well and is compatible with the vast majority of web browsers that we currently have on the market.
Bootstrap offers a wide range of design templates based on languages such as HTML, CSS, and optional JavaScript extensions.

Cordova is a cross-platform framework that uses CSS, JavaScript, and HTML to develop mobile apps. Applications built with Cordova come with native mobile functionality. Cordova acts as a connector between the mobile device and web apps. Using this framework, it becomes easier to develop hybrid mobile apps with all essential native mobile functionality like file system, geolocation, camera, etc.
Cordova’s command-line interface can be used to install plug-ins, create cross-platform processes, and launch projects. In short, Cordova makes it easier for developers to handle development processes. Another great feature of Cordova is that it offers a set of essential components that are essential for all mobile apps. These components are needed to build the foundation of the application.
There is no need to learn any platform-specific languages. JavaScript manages all the coding parts of each platform. This saves the user development time. Various community add-ons, such as libraries and frameworks, can be used with Cordova. A single platform builds everything.

Angular is an open-source front-end type framework that is designed for modern, powerful mobile applications. This framework is competent to develop old and powerful single-page applications.
It can also be referred to as SPA, along with great features that include bidirectional linking, modeling, modularization, and AJAX handling. Angular was introduced to the Internet world in 2009.
Angular was reported to be used in several categories, with over 18.47% in the sector and business category, 5.75% in shopping, 5.49% in arts and entertainment, 5.10% in internet and telecommunications, and 65.2% in others.
The important role of  AngularJS Development  is to reorganize the front-end advancement. AngularJS ships with some systems and modules for planners as well as designers. AngularJS plays the most vital role in Front-end development. Front-end development is essentially about making your website look exactly the way it should! And it includes all the details of your site that users will see and relate to. All those artistic images, live animations, navigation menus, etc. Most companies have to hire the services of an AngularJS developer and also hire a Front-end developer.

The Ionic is a widely used framework in mobile app development company. The biggest advantage is that it is free to use. It is typically a client-side framework that helps in creating native apps with a combination of HTML, CSS3, and JavaScript.

The Ionic framework also supports the latest devices and lays a robust ground for apps before their market launch.

The HTML5 element also helps in creating hybrid apps. And there is no doubt that it is considered one of the best frameworks for developing Progressive Web Apps.

In 2014, Google released the Material Design framework. This is a development built on Bootstrap to show a standard Google look, getting cleaner and more organized.
Anyone who is already used to working with Gmail and Google Drive, for instance, will easily identify with the framework, which may please many developers. Material Design aims to make the page cleaner and easy to understand in the browser.

Flutter is a hybrid application development framework built from scratch by the company. Unlike Ionic, Flutter does not support Java or other common development languages. Instead, it just seems to support developments using Dart, another Google product. The best part about flutter is that it is extremely fast and has its own set of widgets that allow easy implementation of features like buttons, sliders, switches, dialog boxes, tab bars, loading spinners, etc. within the app. The platform is compatible with Fuchsia, Google’s mobile operating system, and comes with an auto-update feature that allows for easy and instant viewing of changes. Due to Google’s full support.

JQuery Mobile is a web development framework via HTML5 and CSS3 using contact interactions. It is a portable tool capable of running on many devices with various operating systems with the same source code version.
JQuery mobile is a recommended framework for developing ready-to-use mobile apps as it does not attempt to compile mobile apps as a native version. The framework design includes convenient menus and allows the development of apps adapted to various screen sizes, making it developer-friendly. However, due to its problems with .NET synchronizations, it is not recommended for complex application development.
The jQuery Mobile has two alternatives: the custom and the latest stable version. Through libraries and plugins, is also possible to optimize the functioning of applications.
This tool uses many functions of jQuery and jQuery UI. With this, you can create responsive layouts with division into columns, widgets, tabs, toggles, and sliders. JQuery Mobile is compatible with tablets, mobile devices, and e-readers.
In addition, the applications also run on desktop systems: MeeGo, Android, Blackberry, Palm WebOS, Firefox Mobile, iOS, Windows Phone 7, Nokia/Sybian, Opera Mobile/Mini, Kindle, and Nook
As you can see, each of these frameworks can be used at different stages of application development, which would make it very difficult to manage the work and increase the total production time. Maybe you don’t know, but there is an orchestration tool for the frameworks used, which can improve the productivity levels of IT teams.
This way, your team’s developers don’t need to know each particular framework, as they have everything they need to create applications in just one environment, without having to worry about manually switching between options. If something better and more productive appears on the market, the tool provider takes care of updating, adding, or replacing the framework to always guarantee the quality of productivity on the platform.
With the use of the most appropriate tools and according to demand, IT team managers have the possibility of considerable cost reduction, in addition to optimizing development time.

In this article, we presented the main frameworks aimed at software development services. Gather your team, choose an orchestration tool and deliver better and more efficient products to your customers.