How to Debug Ruby on Rails through SSL with RubyMine Foreman

If you’re required to debug Ruby on Rails in RubyMine Foreman through SSL, e.g. you’ve got a Facebook App, you will find the following useful.
Unfortunately, I’ve not been able to find a way to debug by using the standard debug rails configuration.  Instead, I had to take the following steps
1. Install Foreman. Foreman is a nice little gem that enables you to launch multiple processes through the use of a Procfile. You can find more info here, http://blog.daviddollar.org/2011/05/06/introducing-foreman.html. The easiest way to add Foreman is to add the Foreman gem to your Gemfile, and run bundle install.
gem ‘foreman’
2. After you install Foreman, you’ll need to figure out your Foreman path. I’m using RVM. My Foreman is installed here:
/Users/joelgarcia/.rvm/gems/ruby-1.9.3-p484/gems/foreman-0.63.0/bin/foreman
3. In RubyMine, go to RunEdit Configurations. The Run/Debug Configurations Dialogwill come up. Typically, when you debug in RubyMine, you’re debugging in Rails. We’re going to do something a little different, we’re going to debug using a Ruby Script. Click on the + button in the upper left-hand corner. Select Ruby. A new configuration dialog will be displayed. Take the following steps: 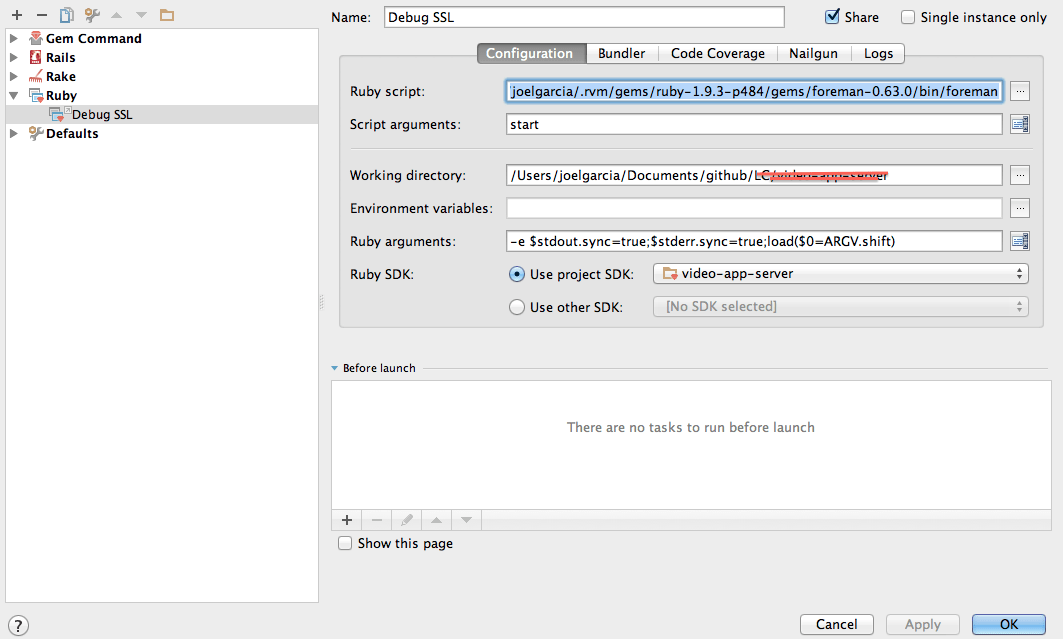 4. Now our configuration is done, but we need to create a Procfile for Foreman to know what to launch when we chose to debug the Debug SSL configuration. Navigate to the root of your Ruby project and create a textfile entitled ‘Procfile’. In the Procfile, you will want to put in the following:
web: bundle exec thin start –debug -p 3000 –ssl –ssl-verify –ssl-key-file /Users/path_to_key/selfsigned.key –ssl-cert-file /Users/path_to_key/selfsigned.crt
Now, what is this? In the Procfile, we’re going to start the Thin web server with the appropriate RVM version. Thin is going to listen on port 3000, and we’re going to run SSL through port 3000 using our SSL keys and cert.
5. Now, in RubyMine, go to RunDebug Debug SSL, and your debugger should launch. In my situation, I’m using a self signed certificate. On my Mac, I’ve only been able to navigate to my http://0.0.0.0:3000 using Firefox d. I’ll write up another article on creating a self signed certificate using OpenSSL later.