In this tutorial, we’re going to deploy the Ethereum Truffle Pet Shop DApp demo to an AWS EC2 Micro instance. If you’ve played with Ethereum’s Solidity programming language to deploy smart contracts to the blockchain, you’ve come to the realization that Ethereum and Solidity are desperately in need of a development framework. Truffle is the […]

In this tutorial, we’re going to deploy the Ethereum Truffle Pet Shop DApp demo to an AWS EC2 Micro instance.
If you’ve played with Ethereum’s Solidity programming language to deploy smart contracts to the blockchain, you’ve come to the realization that Ethereum and Solidity are desperately in need of a development framework. Truffle is the best development framework for Ethereum that we’ve encountered.
Truffle comes with a demo app, Pet Shop, which is similar to the old J2EE demo app. I’m not going to rewrite the Truffle Pet Shop tutorial, which you can find here. Instead, I’ve already implemented the Truffle Pet Shop locally on my Mac OS X. The goal of this tutorial is to get this demo app to run on an AWS EC2 instance on my own test network. I’ve checked in the completed Truffle Pet Shop tutorial into Github, http://github.com/joel-maws/truffle-pet-shop. Let’s get started!
For this tutorial, you will need to have the following items:

Next,  you’re going to install TestRPC and Truffle. TestRPC is the test environment that makes it much easier to run your own testnet. We have another blog posts that describes how to create a CustomGenesis.json block for testing here. For this tutorial, save yourself the trouble. Use TestRPC.
After you ssh into the micro instance, type the first command below, which will install TestRPC. Next, type the second command, which will install the Truffle development framework into your current directory.

Next, we’re going to pull the completed Pet Shop demo from my Github repo by typing the first command into the ssh terminal. We’ll then run npm update in the same terminal to update our node_modules.

After the npm update is performed, go into the node_modules directory to ensure that the modules are populated.
Now, we need to start up the TestRPC Ethereum server. In order to do this, you’ll want to open another command shell, ssh into the EC2 instance, and run TestRPC. When you run TestRPC, you’ll want to make note of the available accounts, private keys, and mnemonics. 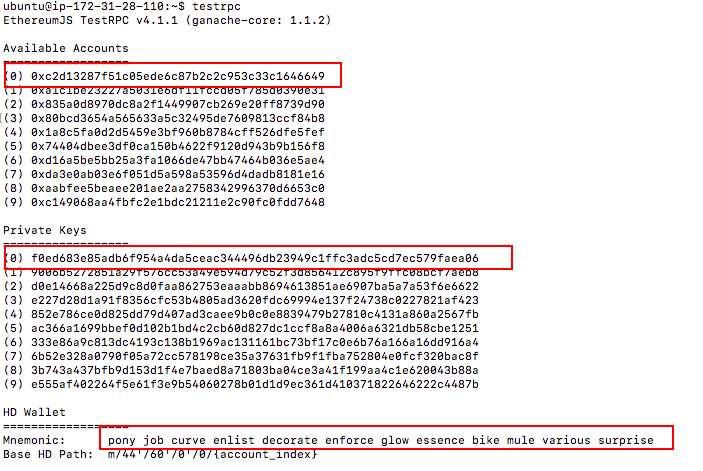 After you’ve started TestRPC, it should be listening on port 8545. Next, go back to your initial ssh terminal. If you’re cheap like me and you’re running this on an EC2 micro instance, then you’ll want to increase your swap space. Otherwise, your TestRPC instance will run out of RAM during compilation of the source code. You’ll want to create a 1 GB swap file. In the initial ssh terminal, type the following commands to create a permanent swap file:

To enable the swap file by default after reboot, add this line to/etc/fstab

Next, return to the directory where you performed the git clone. When we pulled down the source code from Github, we didn’t build the binaries. Solidity is a compiled language that runs on the Ethereum Virtual Machine (EVM), so we’ll want to compile the source code into bytecode so we can deploy the bytecode to the blockchain. Type the following command into the ssh terminal to compile the contracts:

You should see the following:

Now that we’ve successfully compiled our contracts, it’s time to migrate them to the blockchain. Truffle comes with a migration deployment framework which is very similar to Ruby on Rails schema migration.
You’ll run the following command shell in the terminal:

You should see the following output:

In your other terminal shell that is running TestRPC, you should see output that resembles the following:

Our contracts now reside on the TestRPC blockchain. We’re most of the way there.
Now, we need to host the web app. For this tutorial, we’ll use the lite-server as it’s a lightweight web server that comes with the Truffle PetShop app. The invocation of the lite-server is specified in the package.json of the demo.
We’ll run the following command to run the lite server.

The dev command in package.json will start up the lite-server. For me, the web server will run on port 3001 and the admin console will run on port 3002. You can modify the port by specifying the port in the bs-config.json
You’ll most likely need to update your iptables to redirect traffic from 80 to 3001.

Now, navigate to your AWS EC2 micro instance external ip. Voila, your web server should be up and running.

In our next tutorial, we’ll start to run through the kinks of the deployment. We’ll also look into MetaMask and running this on Geth instead of TestRPC.
Note: We are interested in joining the Toptal Software Consultants Group.