macOS, previously Mac OS X and later OS X, is a proprietary graphical operating system developed and marketed by Apple Inc. since 2001. It is the primary operating system for Apple’s Mac computers. Within the market of desktop, laptop and home computers, and by web usage, it is the second most widely used desktop OS, after Microsoft’s Windows 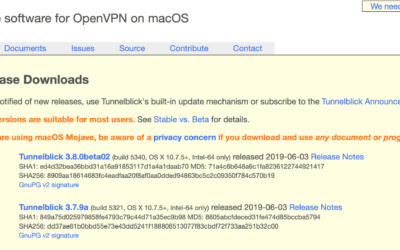 How to connect to a VPN on Mac OS X with OpenVPN, Tunnelblick, and DUO

How to connect to a VPN on Mac OS X with OpenVPN, Tunnelblick, and DUO Download Tunnelblick.  - http://tunnelblick.net/downloads.html (stable version is advised) Install Tunnelblick.Launch TunnelblickDrop the opvn configuration file provided by your system...